BeaRex, the first blockchain-based Play-and-Earn runner, announces the launch of its beta version of an Instagram AR Mask game that will make it even more exciting and engaging in its bright universe. BeaRex redefines the Play-and-Earn gaming category by bringing together Free2Play / Play2Earn gamers and NFT investors into one collaborative ecosystem.

Play-and-Earn is a hybrid of two leading modern gameplay models: Play-to-Earn (P2E) and Free2Play (F2P). First and foremost, BeaRex has been designed for pure enjoyment of the gaming process. In BeaRex, you can either just play for fun or start earning in the game by purchasing an NFT Bear and switching to the relevant mode. 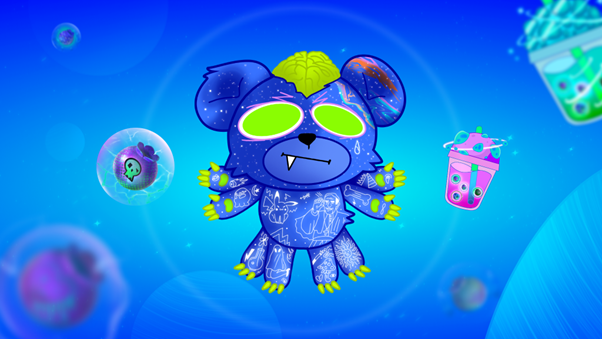 BeaRex is a Play-and-Earn Web 3.0 runner. The game’s essence is collecting berries, creating smoothies, and escaping from the Dinosaur. The player can complete levels by collecting gaming stuff and selling it in the marketplace. Also, the player can give his/her Bear to other players to complete levels and get fixed income in tokens, thus receiving, in fact, passive income. The second layer of gameplay is collecting and upgrading NFT Bears.

NFTs represent most of the inventory in the game and belong to the players. Some types of resources are infinite and are not NFTs. Since NFT is the latest trend in cryptocurrencies today, earnings in blockchain games in the future may become, if not the main, then at least a very significant income for many. Along with the rewards received during the game, in the future, it will be possible to sell various equipment and Bears, which, as the BeaRex community grows, will become more and more in demand and will inevitably rise in price.

The First Version of the Game: the BeaRex Instagram AR Mask

Here you can watch a detailed video instruction on how to participate in the draw.

BeaRex is the game that will suit a variety of purposes. You can just play to relax. Or train, and then get involved in the game “responsibly”, earning on your skills. And, finally, you can invest in cool inventory and Bears and earn with those who cannot afford to buy those yet.

An important feature of BeaRex is that players can save their progress in the game, as it is possible to transfer it from the free version to the P2E mode. To do this, you need to buy a Bear and switch to the “Play-and-earn” mode. It’s probably redundant to talk about how cool it is: knowing that the efforts will not be in vain, players will master the BeaRex universe with much more enthusiasm than if they then had to go through everything all over again.

The simple and dynamic plot of BeaRex is designed for a wide audience. The Bear moves from the chase along an endless level, overcomes obstacles and collects resources on a randomly generated map, which style and management depend on the berry smoothie drunk before. The game’s complexity is constantly escalating: the speed of the chase becomes higher and higher, and the obstacles become more and more complicated.

The players` most important goal is earning. They achieve this by accumulating Trip Coins and cashing them out. They earn Trip Coins in two ways: by selling extracted resources and generating coins when playing at a level.

The community’s goal is to collect as many berries as possible to fill the Berry Collider and save the world from dinosaurs. There is a theory that they can bring dinosaurs back thanks to new technologies.

An important difference between BeaRex and all other blockchain games is that it is not just a game but also an animated series based on its plot. Work on the series is already underway, and the first episode will be ready for release at the end of 2022. The full first season is going to be released in 2023. Additionally, the series will feature NFT Bears from the game, and their owners will receive royalties from the series` rental.

But that’s not all. At the end of 2023, BeaRex will launch its own metaverse. All owners of BeaRex NFTs will have the chance to participate in the creation and production of unique content telling about the BeaRex world and its inhabitants. These episodes will be included in a special season of the animated series, which will also introduce the viewer to the world of blockchain and cryptocurrencies entertainingly, telling how they earn here and what opportunities open up for investors and businesses.

Join the BeaRex universe in beta, download the Instagram AR Mask, and try your hand in the game. Pick up the berries and appreciate the bright BeaRex universe made with love and humor. BeaRex has got everything to captivate you and even, if desired, boost your finances.

Everyone who plays the game will earn 500 TRIP tokens and will enter an NFT drawing worth $5,000. Have a good berry picking and let your Bear run fast!

Ethereum is slowly moving lower below $1,900 against the US Dollar. ETH must stay above $1,850 to avoid more losses in the near term. Ethereum started a…

XRP Price Could Rise If It Clears This Price Barrier

XRP Price has witnessed consolidation between the $0.30 and $0.37 mark for a considerable number of trading sessions. Over the last 24 hours, the altcoin has managed…

Elon Musk is once again causing a stir on Twitter by revealing his intention to purchase popular football club Manchester United. The eccentric chief executive of Tesla and…

Bitcoin has been able to make a resurgence in recent weeks. The 25,000 USD barrier was recaptured by Bitcoin prices just two days ago, marking the first…

Hodlnaut, a cryptocurrency lender and borrower based out of Singapore has recently filed an application for judicial management. This shall help the platform restructure its business. A…